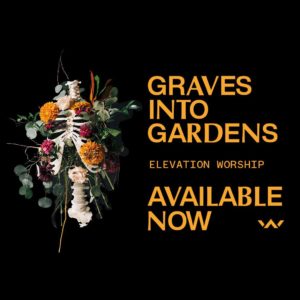 Elevation Worship is the musical expression of Elevation Church, a multisite church based in Charlotte, N.C. founded by lead Pastor Steven Furtick. Over the past 14 years, it has grown into a global phenomenon drawing a weekly attendance of more than 25,000. The GRAMMY nominated worship team released its 11th career project, Graves Into Gardens, on May 1st. Graves Into Gardens is a live album featuring 10 newly penned tracks that dynamically showcase the collective talents of the group while spotlighting a number of special guests. Let’s get to know a little more about the group from Chris Brown and Jenna Barrientes.

CCM: You all are such gifted writers. Talk about the process of what that looked like for creating Graves Into Gardens album and what was one of your personal discoveries in it?
CHRIS: Some of the songs on this album were written a couple of years ago. Some of them, like “The Blessing” and “RATTLE!” were written in the last couple of months. But, I love that this collection of songs feels very authentic to who we are as a church, from the music to the emotional passion that was captured, and of course, the spiritual message in the songs. We work hard at writing the songs that bring us deeper in our faith with God. And, we come around them as creatively in the production. But, I really feel that our church as a whole helped create the sound that was captured on this album. We did it together. We made this project together. The months of writing, rehearsing and imagining the production was a huge part of the process, of course, but the night we shared together with our people at the live recording is one of the most special things about this album. You can hear and feel the energy and passion for God in these songs.

CCM: On this new project, you collaborated with a few different artists like GRAMMY® nominee Brandon Lake from Bethel Music, GRAMMY® nominee Tauren Wells, GRAMMY® nominee Kari Jobe, and Cody Carnes. What was it like to work with these artists and how did they help shape this new record?
CHRIS: We’re grateful to have good friends with a similar passion and mission. We’ve known Tauren Wells for years and have collaborated with him before. And, the poppy, RnB-esq “Never Lost” just begged to have him bring his voice to it. Brandon Lake was a part of writing a few of the songs on this album and became a good friend through the process. We’ve toured with Kari Jobe and Cody Carnes before and have gotten close, but our first time writing together was the very end of February of this year, only a couple of weeks before the pandemic became a reality here in the states. It’s apparent that God had orchestrated our time together that day to bring about “The Blessing” as we’d unknowingly head into this crisis only two weeks later.

CCM: Graves Into Gardens is the new album. That is such a statement title. Talk about the meaning behind it.
CHRIS: Many of our songs come from sermons that Pastor Steven preaches. The title track in particular launched from a message of his called ‘The Mystery of Potential.’ He was in that 2 Kings passage which details that after the prophet Elisha died, his story didn’t end there. Two Israelites were near his gravesite about to bury another man. When they saw a band of enemy raiders coming, they threw the man’s body into Elisha’s tomb. As soon as the body touched Elisha’s bones, the man came to life and stood up on his feet (2 Kings 13:20-21). Elisha still had a resurrection miracle left in his bones, and God is still in the business of bringing dead things back to life. If we’ll trust God even with the seemingly dead areas of our lives, if we’ll believe in the power of God, if we’ll declare resurrection power over everything we sow, nothing will be wasted. Nothing is over. God can turn any situation around.

CCM: Elevation Worship has brought so many powerful anthems of worship songs to the church over the years such as “O Come to the Altar,” “Do it Again” and now “The Blessing.” What do you hope in light of the current pandemic that these songs bring as a source of comfort and strength to those who listen to them?
CHRIS: Our greatest hope is that we’re writing songs that will activate and encourage your faith. Whether it’s just a few notes, lyric lines, or the entire album, we want the music and message to encourage your faith to believe in the resurrection power of all the dreams, hopes, and promises you’ve sown. And to be reminded, that in every season and every circumstance, God is able to do more than we could ask or imagine when we trust Him with our present and future.

CCM: Speaking of “The Blessing”…you co-wrote that track with Cody Carnes, Kari Jobe, and Pastor Steven Furtick and planning to release it on the upcoming GRAVES INTO GARDENS album. What was the inspiration and story behind this song? Why do you think its resonating so well with listeners and making such a huge impact on the world right now?
CHRIS: It actually feels very difficult to describe how that song came about. Almost like, I don’t want to over-explain it for fear that I’ll take away from some of the mystery of how it came into the room. What’s interesting is we were turning in the masters for the album the same day we were writing with Kari and Cody. So, there was, of course, no plan of including any song we may write that day on this current project. But, the best I can say about it in short is that we were finishing up the day and starting to demo another song we’d written with them, and Pastor Steven began mumbling and fiddling with singing the Benediction from Numbers 6. After about ten minutes of us coming around the idea, we decided we’d press pause on the other song and shift focus to this one…and from that point on, it kind of began to pour out rather quickly. We just wanted to be careful not to ‘over-write’ it or over think it, but just let God download the song. A couple hours later, we left with a demo in hand that had us in tears the next day (Friday). And, we decided to introduce it to church that weekend. And so, two days after it was written we were singing it as a church and the recording we’ve now released is from that very first weekend we’d sung it.

JENNA: You never know what songs the Lord will choose to have His hand on in a very specific way. I think with the state of our world as this song was being released, a time when all of our faith was (and still is) being tested, it serves as a reminder that God isn’t just the God of my past, He’s the God of my future and my family’s future and no matter how unstable our surroundings may seem. He’s constant and faithful through the ages. I also believe there’s something so powerful and sacred about declaring scripture out loud. It’s a truth that we don’t have to overthink or debate but something we can all trust in.

CCM: What makes the songs on Graves Into Gardens different from other projects Elevation Worship has released in the past?
JENNA: I love that this album showcases so many different expressions of worship and it’s a beautiful representation of the people in our church. Some like rock, some like gospel, others like Christian pop music, and this album truly hits home for so many different types of people who are in different seasons of their journey of faith. My favorite part was getting to incorporate our choir—that’s us, that’s who we are as a church and I hope people catch that same spirit as they’re listening.

CCM: Right now, in our county and the world at large, there is so much fear, uncertainty, and even depression that people are dealing with regularly. How would you encourage others to be expectant and to look for life that can be in the seemingly dead places we are facing now?
CHRIS: We’re clearly in such a unique and quite unstable time for our world right now. And, I think we’re all trying to figure out how we face each day, how we respond to the reports we hear every single day. But, I want to remind us that God is unshaken by any of this and His plans are still good. And, the weapons we have to fight with each day, the weapons to fight the battles in our minds or the anxiety that’s trying to creep in our spirits, those weapons we fight with are not weapons of this world. Praise is our weapon, and worship is our sword. So, when we choose to worship instead of worry, It’s our way of throwing a counter attack on whatever the enemy is trying to bring against us. We can be confident that we are not having to fight for victory, and because of Jesus, we’re fighting from a place of victory.

CCM: Community is also something that’s key for everyone at this point in time. What are some ways that you hope Elevation Worship’s music can bring people together?
JENNA: We see so many times in scripture, specifically in Acts where power is released when a body of believers come together with the same heart and mind, and we pray that as the Church starts singing these songs of the faithfulness and power of God, unity would begin to happen.

CCM: Creatively speaking, as many of us are having some more downtime, what are some ways we can use our creativity proactively?
JENNA: I keep hearing this common theme of people feeling more distanced physically but have never felt more connected than they do now. I think this is such a unique time in our lives where we get to connect with people that maybe we weren’t able to before. And, we are seeing so many collaborations, more people stepping up to lead and different worlds colliding—which has been such a beautiful thing to witness. I would just encourage people not to fall into the comparison trap and put an insane amount of pressure on yourself but be intentional and make goals that you want to achieve. One practical goal I’ve set for myself is to do a better job at sharing my experience in leading worship and teams with other church leaders so that looks like me taking Zoom calls, doing Q&A’s, recording encouraging videos, etc.. Just make some attainable goals and be consistent and faithful enough to stick to them.

CCM: Is there anything else you want listeners to know about the upcoming album?
JENNA: Our greatest hope is that this album will cause your faith to rise. That you will let the words and melodies settle deep in your soul and produce real, genuine change—change in how you live your life, but also that it would challenge your expectations and idea of who God is. He’s worth trusting, and He’s just as faithful now as He’s ever been. We pray that these songs would not only unlock a greater dependence on God, but will also remind you of the power that He has placed inside you. That your soul would be reminded that Christ’s resurrection wasn’t just an event that happened a long time ago but that same power is still active and available for us all today.