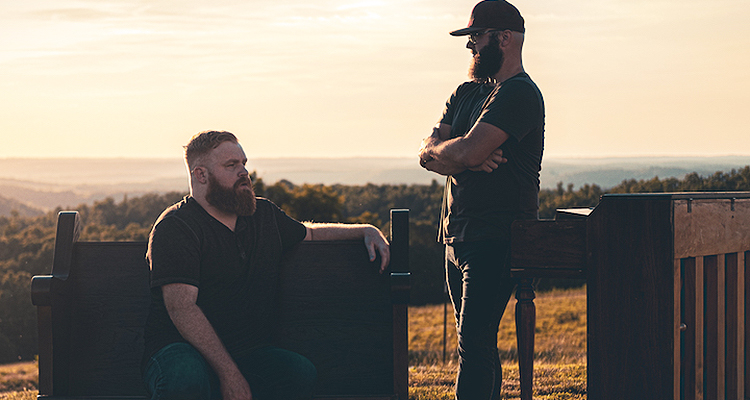 Nashville, TN (July 17, 2020)
“Simple Things,” the new anthem from acoustic/pop duo After Grace, releases today on digital platforms. Written by After Grace’s Cody Clark, along with Daniel Doss, and produced by Foster Ferrell, the poignant song recounts Clark’s personal journey of rediscovering what was most important in his life: “faith and hope and love, and knowing Jesus is enough to get me through the day.”

In addition, the nostalgic “Simple Things” concept video, directed by Joel Burris in association with ATD, takes an autobiographical look at Clark’s growing-up years as a pastor’s son in rural Arkansas. The moving clip was filmed in locations central to Clark’s childhood, and features footage of his father and grandfather, along with the duo’s own families.

“’Simple Things’ came from a tough place I found myself in two years ago, as I was dealing with stress, anger, depression and insecurity, and not being the man God called me to be,” remembers Clark. “I was writing in my studio late at night and felt God speaking to me, reminding me to be thankful for what I have­—all the good and beautiful things He’s blessed me with. That is the message behind ‘Simple Things.’”

“Because life can get crazy and is ever-changing, it can be hard to stay focused and keep our eyes on the things that truly matter—the simple things: our faith, our family, our friendships, being kind to those around us, lending a helping hand to those in need,” continues Clark. “When our time on earth comes to an end these will be the things that truly reflect who we are in the eyes of God and those we leave behind. Let’s be happy we cherished the simple things in this life and kept God first in everything. Let’s leave a legacy that shows a heart like Christ and points people to Him.”

Brothers-in-law Cody Clark and Jerad Moffitt formed After Grace in their hometown of Mountain Home, Arkansas, in 2013. The duo released the singles “Save Me” and “Shine” in 2016 and 2017, respectively. In 2019 After Grace’s debut EP, You Know, released on Burtonwood Records, with the project’s title-cut garnering airplay on Christian AC radio. The duo has opened performances for TobyMac, Building 429, Colton Dixon, 7eventh Time Down, Sanctus Real, Cochren & Co., and Dan Bremnes, among others.